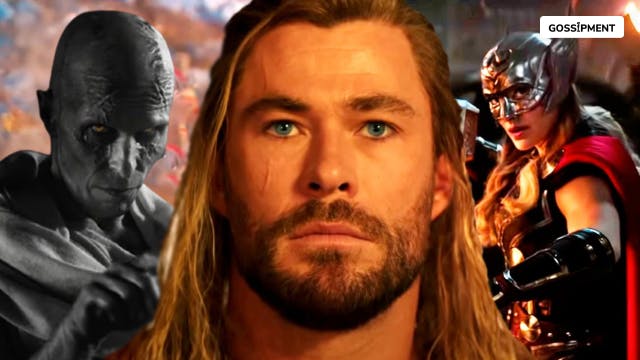 Marvel Studios has just launched a brand new trailer for Thor: Love And Thunder. It has introduced the fandom to Christian Bale’s frightening villain, Gorr, The God Butcher. Gorr’s petrifying look in disturbing yellow eyes, white robes, and white makeup have managed to send shivers down the spine amongst fans.

Dig deeper to get more deets on the trailer….

The Official Trailer Of Thor: Love And Thunder Is Out!

This Thursday, Marvel debuted the very first official trailer for Thor: Love And Thunder after a teaser was released recently. It’s the fourth film in the Thor series and the 29th overall in the Marvel Cinematic Universe.

Chris Hemsworth returns in the film as Thor. The trailer starts with one of the favorite characters, Krog, elucidating how Thor became ‘God Bod’ to ‘Dad Bod’ after a vigorous workout regime. They catch up on their past lives that Thor seems to not have moved on from. The flames of old romance are fired once again.

Gorr, The God Butcher Is Here!

With a menacing voice and chalk-white skin, Gorr (Christian Bale) looks like the “he who must not be named,” Lord Voldemort from the Harry Potter movies. The trailer chaffs Jane and Thor’s fun exchanges, Bale’s extraordinary performance, and some sumptuous fantasy world-building. The best part was Sweet Child O’ Mine from Guns N’ Roses playing in the background, which was also there in the teaser.

Some More Deets About The Film

Taika Waititi has directed the film and re-vitalized the franchise with the commercially and critically successful Thor: Ragnarok. Love and Thunder is also bringing Natalie Portman as Jane Foster and Russell Crowe Cameos as Zeus. On the other hand, the Guardians of the Galaxy Stars Pom Klementieffm, Chris Pratt, Dave Bautista, Bradley Cooper, and Vin Diesel will return.

Marvel’s latest release, Doctor Strange in the Multiverse of Madness, has recently crossed $800 million at the global box office. Thor: Love and Thunder is going to hit the theatres on July 8. Let’s cross our fingers till then!

Colin Cantwell, The Designer Of “Star Wars” Spacecraft, Dies At 90